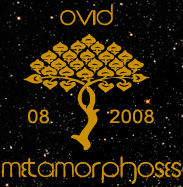 Curate note: Audio Books & Poetry. In his 'Metamorphoses,' Ovid weaves a rich tapestry of images from nature and imagination, one story blending into the next and frequently referencing earlier or later episodes. Drawn from Greek mythology and Latin folklore, Ovid's common theme is transformation. This selection is approximately 10% of the entire work, and is about four and a half hours of listening. Alas, many famous stories are omitted, and also most of the really gory chapters. Metamorphoses was released in the year 8 CE [common era] :-: 8 CE = 8 AD - and now, two thousand years later, in 2008, I have created this commemorative audio version. Ovid has influenced the greatest writers, from Shakespeare to Nietzsche, and is held in near-reverence by many for his storytelling ability. Employing the trick of "frame stories," Ovid has stories within stories; thus the tapestries in the Arachne story are triggers for numerous sub-stories, often just referential phrases telling deep stories in content-rich prose... These stories have been watered down in today's versions, and much of the dark and 'cthonic' has been edited out. The story of the Bacchae, omitted here because it's so often done on its own, is actually a disturbing, violent affair. Many stories involve 'forbidden' sex combinations and may arouse squeamishness... Ovid himself actually warns 'Fathers and daughters to not listen to the story of Myrrh and Cinryas.' Women are either ethereal nymphs or bloodthirsty witches.  The first six clips are read in both English and Latin, alternating by verse. The last four are only in English. I read the Latin with my own attempt at pre-ecclesiastical pronounciation. . . It's kind of experimental. Because of the way the stories are wound together, there is no need to listen to them in order, either...
In June, 2017, I re-did the audio and greatly improved it on all of these files. These are all now on youtube as PMVs, Here.
For more information: http://en.wikipedia.org/wiki/Metamorphoses_(poem) 1 Creation 11 mins [English and Latin] 2 Tiresius 5 mins [English and Latin] The Prophet Tiresius changes into a woman for 7 years 3 Echo and Narcissus 41 mins [English and Latin] Unrequited love 4 Perseus, Atlas, and Medusa 20 mins [English and Latin] Heroic adventures 5 Rape of Proserpine 38 mins [English and Latin] Proserpine [Persephone] is Abducted by Pluto 6 Arachne becomes a Spider 34 mins [English and Latin] Arachne and Pallas Compete in Weaving, and Arachne Loses 7. Minotaur - Daedalus 10 mins [English] The Labyrinth and Ariadne's Thread Daedalus and Icarus The Invention of the Compass Daedalus' Nephew becomes a Partridge 8. Orpheus in Hades 43 mins [English] Orpheus' Audience of Trees Cyparissis and the Stag Pygmalion The Transformation of Myrrh Venus and Adonis, and the origin of the Anemone flower 9. Tales of Orpheus and Midas 35 mins [English] The Death of Orpheus Bacchus Mourns The Transformation of the Thracian Women Old Silenus King Midas The Treachery of Troy Hercules Rescues Hesione Peleus Wins Thetis Thetis and the birth of Achilles Daedalion is Transformed into a Hawk 10. The Teachings of Pythagoras 26 mins [English] Argument for Vegetarianism Pythagorean Cosmology Kinds of Water The Four Elements The Phoenix
Translations by Mary M. Innes and Frank Justus Miller http://www.rafimetz.com